According to Homeland Security Research Corp.’s (HSRC) new report, European Explosives & Weapons Detection Technologies Markets ““ 2016-2022, the European explosives and weapons detection Market will grow by 250% from 2015 ““ 2020, an unprecedented growth rate for the sector. An increased demand for explosives and weapons detection products had already commenced after the November 2015 Paris carnage (French manufacturers of weapon detectors reported a 300% sales hike after the Paris carnage).

The major challenge is the detection of homemade improvised explosives like TATP (used by the Paris and Brussels bombers). TATP is attractive as a terror weapon because it is relatively easy to prepare and, until recently, could not be detected by standard explosives screening methods. TATP’s precursors can be easily found in hardware stores or beauty salons (e.g., nail polish removers). In addition, improvised explosives precursors like hydrogen peroxide, acetone, and mineral acid can be purchased in large quantities.

Some European screening checkpoints (especially in the private sector) are equipped with older models of explosives detection systems that detect only military grade explosives and cannot .identify the hard-to-detect improvised explosives. These systems and devices will need to be replaced or upgraded with state-of-the-art detection systems like tomographic EDSs, X-Ray scanners and Explosive Trace Detectors (ETD) that detect (to some extent but far from perfect) improvised explosives like TATP, RDX.

The market is set to undergo a major transformation from 2016-2022 through the following drivers:

The European Explosives & Weapons Detection Technologies Markets ““ 2016-2022 report consists of 254 Pages, 40 Tables and 86 Figures. It covers 12 Countries and Regions, 5 Technologies, and 3 Revenue Source Submarkets, offering for each of them 2015 data and assessments, and 2016-2022 forecasts and analyses. 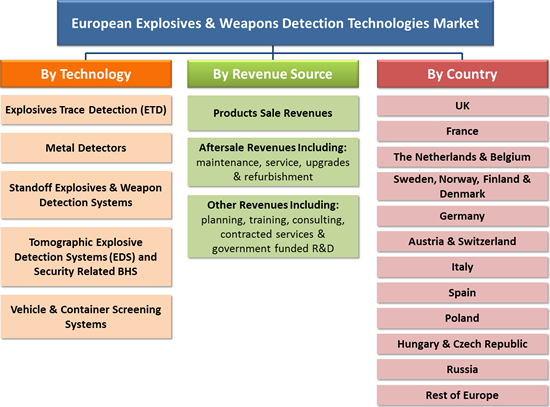 The report is part of the “Europe’s Terror & Migration Crisis Series” reports which focus on the European Counter-Terror and Public Safety Market. Other reports in the series include: