The first seven years since 9/11 have been characterized by focusing HLS-HLD (Homeland Security and Homeland Defense) resources on urgent short-term needs, in an attempt to “harden” the free world’s most critical terror targets against future terror attacks. The next decade, we forecast, will see an even faster growth of these same markets, along with the introduction of new technologies.

Here are some of our conclusions and forecasts:

The following figure depicts the markets for HLS-HLD from just before 9/11 through 2018. 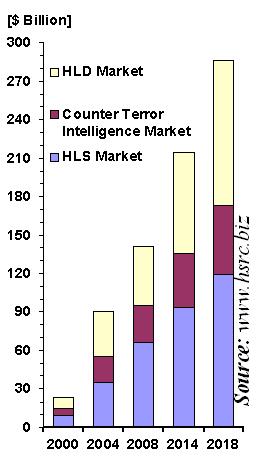 Distinguishing Features of This Period

Dramatic growth in the aviation security sector (post 9/11) represents a crucial step in re-establishing the flying public’s confidence in its institutions.

There has also been a dramatic growth in allocations for counter-terror intelligence, as part of the general intelligence sector. This growth focused on surveillance in cyber space, databases, and automatic translations systems (particularly from esoteric languages).

In the area of bio- terror, the global HLS-HLD community invested about $40 billion in biological defense systems.

Despite the high priority given to nuclear/radiological terror threat by the White House, it failed to cast a comprehensive strategy while the HLS-HLD industry failed to develop effective nuclear-Radiological screening systems.

In many countries, such as China and the European Union, a significant effort focused on integrating new biometric identification means (e.g., e –passport, e-ID.).The US, on the contrary, lags behind significantly in this area, a problem anchored in considerations of Human Rights, and the historical struggle between states and the federal government.

In the area of HLD (Homeland Defense, is defined as the armed forces assets dedicated to terror protection of the homeland), there has been progress in many countries, including a transformation in targets, budgets. Military budgets and personnel levels. This was part of an attempt to give a real military style coverage to non-military solutions, including the re-routing of military resources toward containment of terror.

In all the other sectors of homeland security, such as infrastructure security, maritime security, first responders, command and control, etc., the world invested in the first seven years following 9/11 more than 100 billion – without achieving a significant security improvement.

Most significant HLS progressed can be seen in countries such as Great Britain, Israel, Turkey, Saudi Arabia, and United Arab Emirate.

While the notion of the global defense Industry is that they arrived at an all times high in orders backlog which will be followed by a market decliner. The global HLS-HLD market is robust and is forecasted to grow over the next 10 years at an impressive annual growth rate of 7-7.5%.

The Next Decade Largest National Markets: 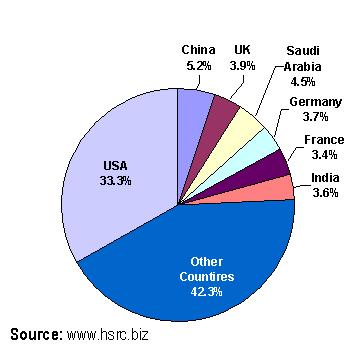