As we (HSRC) believe that since 2002 the next generation of EDS-based screening will and must be augmented on automated Explosives Detection technology based on an X-ray Diffraction technology (we elected to provide the reader with an in-depth description of the technology and its application.

The Coherent X-Ray Scatter, an automated Explosives Detection technology based on an X-Ray Diffraction technology was first developed in 1990-1999 by the Industrial X-Ray Division of Philips GmbH and its successors YXLON GmbH.

The system utilizes an energy-dispersive diffraction technique to identify a wide range of substances based on the differences in the molecular structure of materials. The specific implementation of this diffraction technique uses an energy resolving detector array to detect scatter at a small fixed angle. A C-Arm scanner maintains the alignment of the X-ray source and detector and scans baggage transversely, while it is transported through the system on a conveyor. The entire bag is scanned to generate three dimensional materials-specific using coherent scatter spectra that are automatically evaluated to determine .if materials of interest, such as explosives, are present. The resulting scatter spectra provide information regarding the molecular structure of the scattering materials.

The technique provides a means to identify and discriminate between different materials at a level that is unsurpassed because it is a molecular-based technique. This inherent discrimination capability enables the detection of a wide spectrum of explosives while simultaneously rejecting virtually all other materials. Recent testing of the technology by German and Israeli aviation .security agencies demonstrated levels of detection previously believed. to be unachievable while simultaneously achieving minuscule false alarm rates. The technology is in use in several countries, including Israel and Germany. 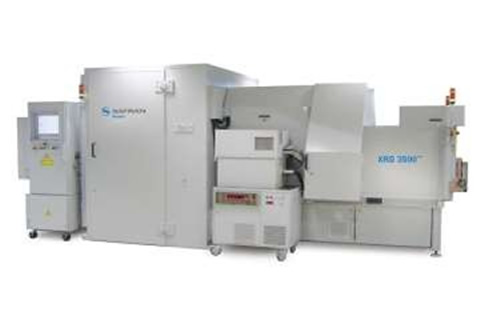 A high-power X-ray tube is located above the inspection tunnel as shown in the Figure below. The X-ray tube beam is collimated by a primary collimator that shapes the beam into a cone and penetrates the bag from above in a localized area. As with most interactions between X-rays and an item under inspection, the X-ray energy penetrates the item, and is absorbed and scattered by it. A secondary collimator and high-energy resolution detector assembly detects the scattered radiation in the same direction as the primary X-ray beam at a very small fixed angle from the primary beam. A high energy resolution detector is required because the scatter partials are detected at a fixed angle in the energy dispersive configuration.

The detector is divided into annular segments such that scatter is detected .from a number of distinct horizontal regions simultaneously over the full height of the inspection tunnel. This detector configuration, therefore, provides scatter information that is resolved in the vertical direction.

The X-ray source and detector set are scanned across the inspection tunnel to collect data from a “strip” across the entire bag to provide scatter data that is spatially resolved in the horizontal direction. This process is replicated until .data is collected from the entire bag. The scanning rate, speed of the conveyor, geometry of the X-ray beam and the dimensions of the detector segment have been developed to create voxels which have the same dimension in each direction. Data collected from the voxels of a given bag creates a three- dimensional representation of the bag with respect to scatter data. The scatter data from each voxel are analyzed over a range of X-ray energies to create individual scatter spectra for each voxel. 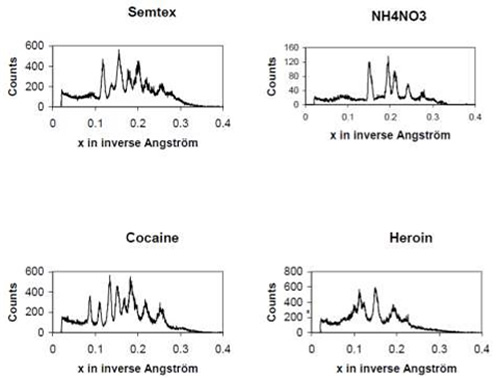 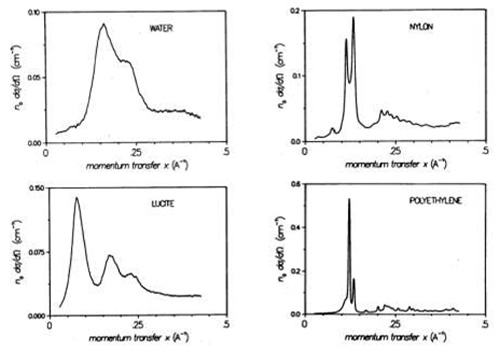 The individual scatter spectra are then compared with an extensive library of spectra for targeted materials. If there is a match, the system alarms and reports the location of the voxel or voxels and identifies the material detected. 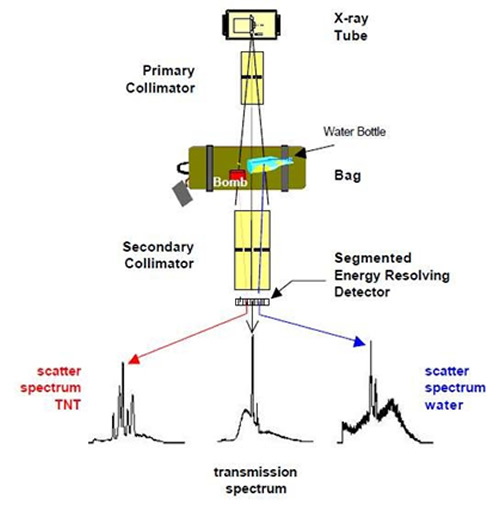