In recent years, to ensure safety and security in transport services, there is a need to increase security to discourage and prevent the carrying of explosives into means of transport such as airplanes. For example, flight safety would be significantly increased if it were possible to inspect passengers for explosives at the boarding gate, the last point of inspection before boarding the flight. However, as several hundreds of passengers need to pass through the gate at once, the time taken by conventional metal detectors and X-ray inspections was an issue.

Hitachi in collaboration with The Nippon Signal Co., Ltd. and the University of Yamanashi have announced the successful prototyping of a boarding gate with built-in explosives detection equipment as part of their efforts to increase safety in public facilities such as airports. The prototype boarding gate efficiently collects minute particles which have affixed themselves to IC cards or portable devices used as boarding passes, and can detect within 1-2 seconds the presence of explosive compounds using internalized equipment. According to the company, it is possible to inspect 1,200 passengers per hour.

The technology is expected to contribute to the prevention and containment of carry-on explosives as it inspects immediately prior to boarding without disrupting the flow of passengers and provides increased security without affecting convenience. 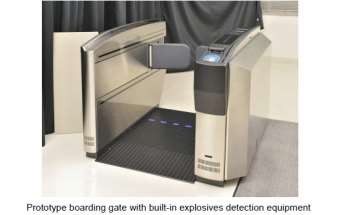