This approach represents a holistic and flexible upstream technical solution for the equalization and differentiation of in-depth control and minimal check of passenger traffic. New terminal processes allow it to be as pleasant and safe as possible for the traveler without excluding certain groups of people, thus reflecting a modern and progressive Airport.

With the Airport automated border control, the strategy of the Integrated Border Management has been recognized in terms of the quality and quantity of border crossing, the training of border control forces, the ratio of the number of control agents against the control forces, the technical / technological equipment and the optimization of individual processes of major importance.

It is estimated that there were up to 20 million illegal immigrants in the world. Half of them probably entered the country legally, but the authorized period of stay has been irregular (so-called over-stayers). The passport of any third-country nationals should be manually stamped on entry into and exit from the Schengen area. The period of stay of third-country nationals in the territory of the Member State shall be calculated based on these stamps, which are often difficult to interpret; sometimes they are unreadable or may be the target of counterfeiting.

The precise calculation of time spent in the Schengen area is done on the basis of stamps in the travel documents, which is time consuming and difficult. In addition, the length of stay of third country nationals in the Schengen area is not currently covered. Therefore, the present determination of whether a third- country national is overstaying or not is hardly reliable. There is no consistent record of entries into and exits from the Schengen area, which could contribute to the improvement of border management, security and planning; also it is not possible to collect information about over-stayers. 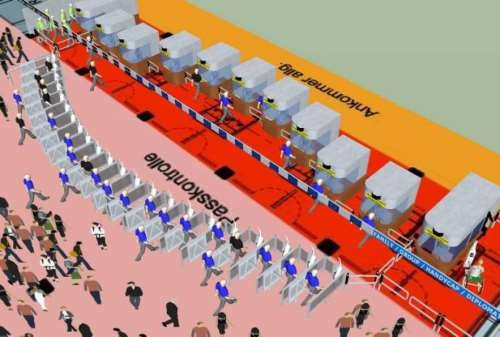 The airport automated border control system is generally applicable to all boundaries. It would ensure all cross-border clearance and thus unify the security that is the guarantee for the return in the responsibility of each country.

For the traveler, further advantages can be seen in the concept of classical elements of customer service.

Advantages for border officials result from the fact that they have already submitted information from the electrical tests before the passenger in front of them. Also, the psychological pressure is reduced as the impact so far through long queues was on the border officials. What is important is also that the border control forces along with the airport automated border control also continue to participate actively in the clearance processes, rather than give away their experience to the observation of surveillance images.

The technology used to adapt to the development with loss of function and downstream control of the security shows that the airport automated border control is best suited to be used as a test vehicle for new technologies without hindering the traveler.